Fact of the Day: Charles II the Ugly 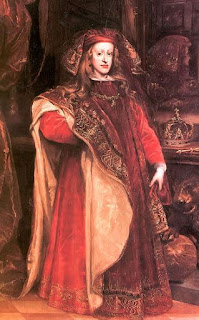 While inbreeding was common among royal families, The House of Habsburg took it to an extreme level. Members of the royal house acquired many thrones in Europe with two major branches in Spain and Austria. The Spanish line was the first to fall, but not due to war but by a branch dying out. Charles II of Spain was already born to a line of family members who had married cousins and other close relations. His mother was actually the niece of his father. Charles II was born ugly, and disabled both mentally and physically. While his reign was brief, he died at the age of 38. Even in his younger years he was very sickly but apparently had baffled the rest of Europe by continuing to live.
Posted by Adam at 12:00 AM

Email ThisBlogThis!Share to TwitterShare to FacebookShare to Pinterest
Labels: Austria, fact of the day, Spain

Yes, he was impotent and when he died without an heir it sparked the War of the Spanish Succession.

Oh, that's so sad :( Thank you for stopping by my blog, and leaving me such a supporting comment!

Yup, The Habsburgs loved to keep the bloodline in the family resulting in a freaky looking chin and nose. I think inbreeding is not the way to go...just saying

Someone should tell Game of Thrones about it