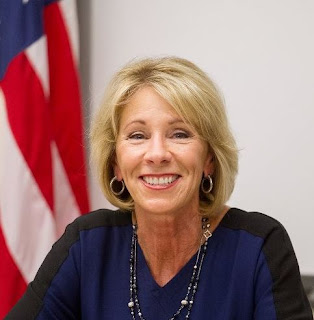 The highly controversial Secretary of Education Betsy DeVos was nominated by Donald Trump, however she originally didn't support him. During the GOP primaries she backed Jeb Bush, then Carly Fiorna, and finally Marco Rubio. She originally called Trump an interloper and said that he "does not represent the Republican Party".
Posted by Adam at 12:00 AM

And she is really the wrong person to head the Education department!

I don't even know how the liberal Americans are dealing with the country right now and all the people in office:( DeVos...I have no words....:(

Bunch of nutballs only out for them.

I am not surprised but I also don't think of her as the brightest bulb.

Not the brightest spark in the Turnip Top cabinet!

And we here have "Turnip Top's" VP arriving on Saturday
after his trip to the "Starring Across the Line" at Kin Jong-uns
brain washed troops. Loved Pense's flak jacket..he looked so BRAVE!
Another thing: What are his two daughters doing on an official trip with him - Audrey and Charlotte??? A free tour of the other side of
the Pacific at tax-payers ( that is those who pay tax in the US...not the Turnip Top mob) expense??? I would think they should be at College or University not flittering around the Pacific on a junket!
I hope Djarkarta and Sydney give Pense and family a "lovely" reception..........I very much doubt it. More like damn riots.
I hope Indonesia and Australia send the Washington the bill for damages.
Colin

Oh.... "send to Washington the Bill for damages".
The scare of Pensey boys Boeing 757 VP Special
flying over Australia is just too scary to contemplate.
Poor fellow - still no appointed Ambassador to greet him
only a State Department ( and no doubt sensible) Charge d' Affaires to do the job. I hope Turnip Top leaves this appointment and not send one of his golfing buddies to make an utter fool of himself as the Ambassador........the again our Foreign Affairs department may refuse the "golf Buddy" appointee. One can but hope.
Colin

When I consider Trump's cabinet appointments I feel like I slipped into an alternate universe.