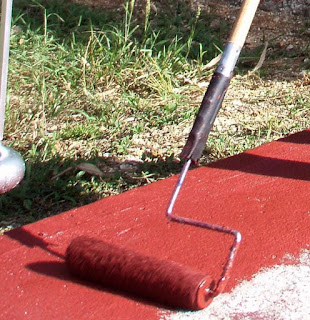 The first paint roller was invented by a Canadian man named Norman Breakey in 1940. However he was never able to put in on the market before others came up with their own. A science fiction writer named E. E. Smith however wrote a story using rollers to spread paste on a spaceship in 1931 but it was a theory for a story, there was no working model until 1940.
Posted by Adam at 12:00 AM

I love all these facts you dig up, Adam. Too bad the guy didn't cash in on his invention. I used to take diapers and sew them up the sides when my kids were little. A few years later there were pull-ups invented. lol

Interesting. I never thought about how long paint rollers have been around.

That is pretty interesting