Fact of the Day: Madden Football 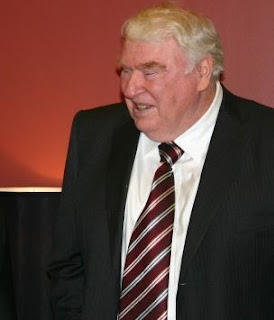 While John Madden is well known in the NFL for his work coaching and broadcasting games (along with a video game series with his name), he never played in the NFL himself as a player. He played college football and was drafted to the NFL for the Philadelphia Eagles. However an injury during pre-season training ended his playing career in the NFL before it even began.
Posted by Adam at 12:00 AM

Not a big football fan, but even I know who he is:D

Good that he still managed to work in the field that he loves!

Sucks indeed when it gets cut short. Still made a name though

Such is his fate but he did ok.

I did not know that, Adam...but have watched him many times over the years.

I think it was good that he still managed to work in the sport that he likes.

It must have been tough for him at the time but he did very well.

He made quite an impact on the sport.