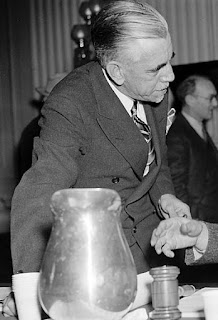 William Dudley Pelley was an American fascist and anti-Semite who idolized Adolf Hilter. When the Nazis took over Germany, Pelley founded The Silver Legion which mimicked the Nazi party in many ways. He ran for president in 1936 under the Christian Party ticket and only made it on the ballot in one state. Being an American Nazi quickly landed him in federal prison and his party and support collapsed as World War II escalated.
Posted by Adam at 12:00 AM

Email ThisBlogThis!Share to TwitterShare to FacebookShare to Pinterest
Labels: Christianity, fact of the day, germany, politics

The slammer was a good place for him

He ended up on the wrong side of history, But just like the American Communist Party, people in the thirties and early forties didn't know how those totalitarian regimes would negatively impact the world.

My dad, who was in his 20's during the 1930's, remembered how many people in the States and Canada liked Hitler. Remember, German was desititute after WW1 and then, during the Great Depression, the average Joe saw that the average German could afford a car, the Volkswagen, and the small kids started school very young...Kindergarten. People were returning to work and feeling proud where people onNorth America were feeling anything but. Thankfully saner heads were in charge...not like now

Not the side of history you want to be remembered by.