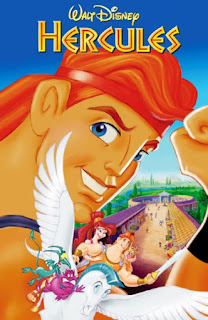 I do remember when Hercules came out in 1997 and I have to say that I was not interested in the movie at the time. I want to say it was because I didn't like the art style of the movie. Western artists can have some pretty funky looking characters, and I just didn't feel right about Hercules. But seeming how Disney keeps making live-action remakes of their classic cartoons, I figured it was time I saw this one. It made a decent splash into the realm of pop culture and a lot of Disney fans remember it fondly. My wife saw it many moons ago, but how does it fare pretty much twenty years later? 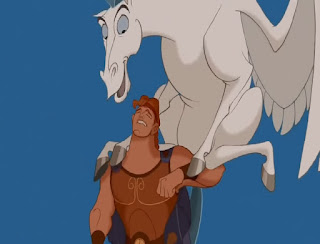 Like most Disney movies, Hercules is based on a an earlier story. This one obviously being based on Greek myth. Hercules is not technically a demi-god in this one, as his mother in the Disney version is not human. Rather she is Zeus' wife Hera, and daddy Zeus couldn't be more proud of his immortal son. However Hercules' uncle Hades foresees being defeated by his nephew after releasing the Titans to overthrow Zeus. His decides to get the upper-hand and plot against the little baby. He has him taken away and he is given a potion that makes him mortal. Hades' minions were too incompetent to make him finish the whole potion, so Hercules manages to retain very godly-like strength. He grows up a "freak" but as a young man he learns of his real parents and hopes to get his immortality back. His father tells him that he must doing something worthy of being a hero. 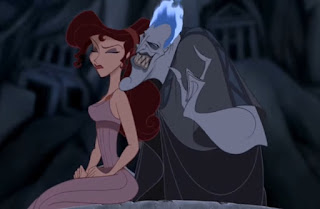 Hercules ends up meeting Megara or Meg for short. He tries to save her from a monster but she ends up not really needing his help. She was only there to recruit the monster to join Hades' side in the upcoming secret war. The monster instead wanted to take advantage of her "beauty". Hercules mentor Philoctetes tries to make him a hero. Hades learns that Hercules is still alive and powerful as well. He gets Meg to led Hercules into a trap. Meg isn't a bad person but is bound to serve her villainous god after a poorly thought out deal. Will Hercules be able to stop his evil uncle, and will Meg resist falling in love? 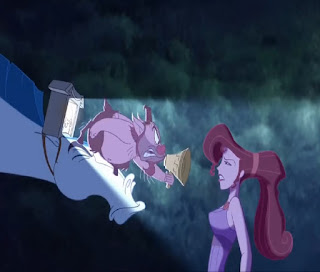 Overall Hercules is about what I had expected. It's not even close to being as good as something like The Lion King, Cinderella, or Beauty and the Beast, but it's a good Disney movie. Like many of it's Disney sibling movies, there are musical numbers but they fall a little flat in comparison. I recently saw Mulan for the first time and Hercules' songs don't even hold a candle to it. As far as a live-action remake, I think they will most likely do one on it someday. And I'll see it for sure, but most likely not in theaters. Unless they cast someone I really like in it. Megara sure was an interesting character, and they'll have trouble one day casting the right woman for the role.

I have no interest in seeing this movie

I think I watched it when it came out, can't remember much though!

I watched it with the kids years ago. I think your B rating is a fair one...maybe even a B-.....but a wholesome enough story. Music was just okay.

i love cartoons and animation. but it's not my type of movie.

I saw this many years ago. My rating would be the same as yours.

My little brother watched this one on repeat when he was about 5. If I never see it again, it will be too soon!

I enjoyed the stylized drawing of the characters.