Photo: Got a Nintendo Switch 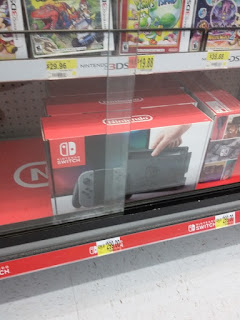 With the years flying by, it didn't seem that long ago since the WiiU was new. It didn't work out so well for Nintendo, but the new Nintendo Switch is doing so good that you can't really find them anywhere. Yesterday my wife and I went into Walmart and found a few. I almost couldn't believe it. The original Wii was a lot like this (even worse as it was a holiday release) and I remember finding a box at a Walmart. They clerk at the time (mid-2000's) claimed it was a display box and I was almost so angry I could have easily kicked the glass. He was joking, but now a decade later I had an old woman get it for me out of the case. Luckily she wasn't a jokester and she didn't even realize that they had some. 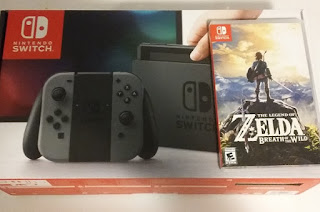 Right before we went to Walmart, I decided to let my WiiU suffer from no more loss of value and traded it to GameStop. We had to go right back to Gamestop to get The Legend of Zelda: Breath of the Wild. I had more than enough on the card to get it especially as someone had traded it in so it was used copy of the game. Instead of discs (CDs, DVDs, Blu-Rays), the Nintendo Switch actually uses very tiny cartridges like the 3DS does. I actually don't mind that since discs can be scratched and it can ruin a game. They actually coat them with something to make them taste terrible so kids don't swallow them. I found this out as last month when it came out, gamers tasted it to see how bad it was. I guess it's a like a "wet paint" thing, nobody can just take someone's word for it.
Posted by Adam at 5:00 PM

I never had one of those games.

Oh good for you on the Nintendo Switch. My son has the old wii.

It's always nice when you find something that you want!