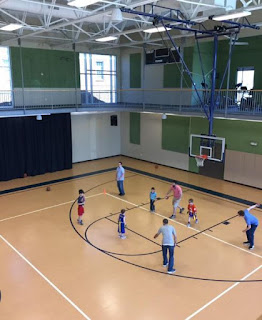 My brother Steven organized a flag-football game during my nephew Mr. K's birthday party. Since there were only four boys (none of the girls wanted to play) the teams had to be filled with some grown-ups. Even though Mr. C insisted I be on his team, I got assigned with my brother Steven, my brother Zach, my nephew Mr. K, and one of his little cousins. Steven was quarterback, and it was more challenging than I'd imagine. We kind of equaled things out as you'd often counter someone of your own age level. My brother Steven's half-brother Micah was my bane that game as every pass had him right in front of me. It was so hard to shake them off given the space of the gym. 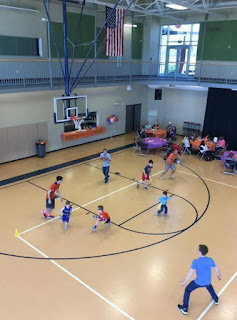 I was better on defense, to my nephew Mr. C's annoyance. He'd just happen to be just where I was when he caught the ball most of the time and I tagged him out more times than he'd like. The game was highly competitive so they only slack we gave the kids was that we wouldn't interfere with them catching a pass. Neither side gave them much running room unchallenged. Mr. C was pretty good because he managed to dodge like five people in one run, most of which were grown-ups, getting his only touchdown of the game. We had an early lead at the start, but the game eventually ended in a tie when the clock ran out.
Posted by Adam at 1:00 PM

Great to see this family fun!

Sounds like a fun way to spend time together.

But how come none of the girls wanted to play?

Sounds a fun time and a tie too!

It looks like you had lots of fun! and how nice that it ended in a tie, because family competition can get so serious!