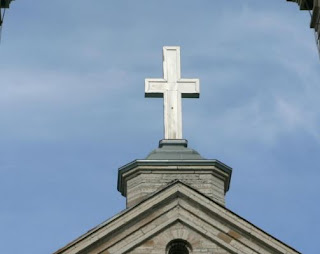 The State of Alabama is seriously considering a bill that will let a local mega-church have it's own police force. That honestly scares me a lot as that sounds like something straight out of the Middle East. They claim it's for "security and safety" of church members, but why can't they hire private security? The U.S. Constitution prohibits religion and government mixing, so I really can't see this lasting long before a higher court knocks it down. It would be ironic for them to get a tax-payer funded police since churches don't pay taxes.

Does an Alabama Christian police force concern you?
Posted by Adam at 12:00 PM

Sounds illegal and dangerous to me.

I imagine it won't last long.

Good grief, what next.

Any religious police force scared the hell out of me.

Why can't they just hire a private security service, like you said? It's not like a mega-church couldn't afford it.

ARE YOU KIDDING ME? Didn't Afghanistan have some kind of religious police to enforce Sharia law or something like that? It was terrible! So this Alabama church wants to start going down that road?

I am against a tax funded police force going into a mega church for extra security. With the amount they make, they can afford private security or pay the city for the use of their off-duty officers. If they don't have to pay taxes, the rest of us shouldn't have to foot the bill for their security.

The thought of religious police sets off red flags for me. Hire private security or pay off duty offices. This should be challenged in court.