Question: Did You Ever Watch Wrestling? 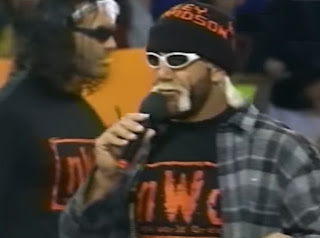 When I was in elementary school, I loved wrestling. I never watched WWF (or now WWE) but I loved WCW which was later acquired by WWE after they stole a lot of their thunder. I heard it was all fake and I had a period of denial. But after I knew it wasn't real, it was rather stupid. It was very much like a bunch of guys in a soap opera.

Did you ever (or still) watch wrestling?
Posted by Adam at 12:00 PM

Yeah, got rather stupid after one learns most of it is fake

I could not sit through even five minutes of that stuff.

I loooved watching it! Even if I knew it was fake, it was still entertaining.

My grandfather (who was a very staid man-not given to showing much emotion) would get so excited watching wrestling that he could not contain himself. We used to laugh (behind his back) watching him.

My husband is a big fan, I don't get it.

I actually used to watch wrestling with my dad when I was a little girl. It wasn't so much the wrestling as spending time with him that I enjoyed.

No, I wasn't ever into wrestling. It just looked too fake.

I did back in the 80's. My bother was a big Rock and Stone Cold Steve Austin fan. You are right. Once you realize it's staged, it's really stupid.