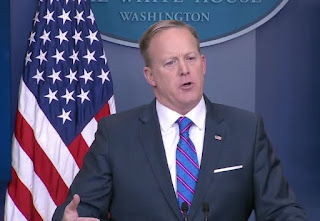 Like most under Donald Trump's (liquor) cabinet and administration, Sean Spicer has his issues. The White House Press Secretary hasn't really been a political post that many really cared about. Most can't recall many formers ones by name as the position has been more boring than not. Sean Spicer certainly hasn't been boring, he's lied, exaggerated, and been polarizing; just like his president. Just today, he claimed Hilter never used chemcial weapons during WWII to defend actions against Syria. Holocaust victims were quick to remember, that's NOT true.  If Trump was smart, he'd ask Spicer to resign. I don't really care if he stays or goes. Trump's government is just as ludicrous and incompetent as we had suspected.

Should Sean Spicer go?
Posted by Adam at 7:00 PM

I will try not to remember how stupid this man is when I am walking through the Auschwitz-Birkinau concentration camp this summer on my trip through eastern Europe. He does need to resign, but then someone equally as ridiculous would just take his place.

Certainly was TV news here this morning.
The man is an utter idiot.
Seems he makes mistake after mistake.........the joke is
on the "Turnip Top" clones/clowns. Surely decent US citizens are
sickened by the utterances coming out of the Tweet Capital of the World!!!
Seems Turnip Top has forgotten all that he said he would do prior
to being elected.
"Make America Great Again"????? Maybe he meant "Make America the laughing stock of the World".
Colin

"Better to remain silent and be thought a fool than to speak and remove all doubt."

Should Spicer go? Yes, and he should take Trump with him.

Should he go/Probably. Will he? I highly doubt it.