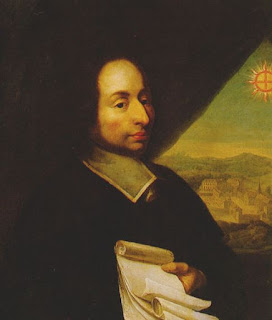 While most regular folks have no idea who Blaise Pascal was, but the French philosopher's most famous argument is still used today. The argument basically states that if one believes in God and they are wrong then just wasted their mortal life. The counterpoint is that if one doesn't believe in God and they are wrong then they wasted their eternity. I do find this a little odd that Pascal came up with it since he lived quite a bit before the rise of irreligion and atheism in France. I guess he used it for societies with religions without the scare of "hell".

When I was a produce clerk we had one guy that did not like my irreligious viewpoints even though I never really discussed religion in the workplace. He asked and I answered. He wasn't a pious man by any means. He had a son born out of wedlock to a woman he never intended to marry, and he was a big womanizer. But as a Christian, he used the same argument which I've always disagreed with. Being afraid of the idea of hell should not be the reason for belief. I think many also "believe" just for the fear of death or fear of becoming "nothing".

I'm not going to say there isn't a God, gods/goddesses, or some other (which is more likely than the former) type of higher power, but I don't think such a higher power would be even remotely interested if people believe in them or not as they are awfully silent especially in the age of cameras.

But suppose "God" is that intolerant.and suppose you picked the wrong God. Wouldn't you be making them furious by worshiping in the wrong deity? Out of the countless thousands of religions that have been on Earth, are you really that sure you picked the right pony?
Posted by Adam at 12:00 PM

There has never been a doubt for me.

Good post, Adam. Religion is a personal matter and people should stay on their side of the holy fence about it. Believe or don't believe, and leave others to do the same. Let me worry (or not worry) about my soul. Many religious people I know personally commit all kinds of sins in their daily life yet they're judgmental and always front and center in their place of worship. That is hypocrisy.

Totally agree with Martha.
It is a private matter and carrying on "like demented pork
chops as some do" should result in a one way ticket to a
lunatic asylum.
Colin