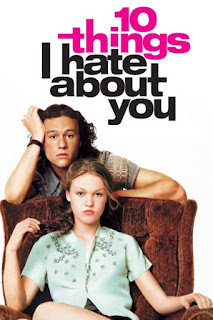 10 Things I Hate About You is a movie I've heard about for a few years now. Back in 1999 I was a bit too young for the movie to appeal to me. But many of us had a huge respect for the late Heath Ledge after his jaw-dropping performance as The Joker in The Dark Knight. Apparently 10 Things I Hate About You was also one of his first big roles along with Julia Stiles and Joseph Gordon-Levitt. I also recognized Larisa Oleynik who I remember the most as kid watching The Secret Life of Alex Mack on Nickelodeon. I really liked her back in the late 1990's so it is a bit sad that while she still acts, she never amounted to much. But regardless, what did I think of the movie? 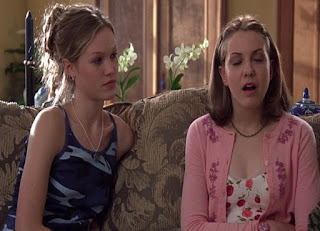 The film is focused on two young but polar opposite sisters. One of them is Bianca Stratford who is the younger of the two. She is the typical popular pretty girl in the high school. Her older sister Katarina "Kat" Stratford was once just like her, but dropped from grace for unknown reasons. She became very opinionated and very anti-social.  The guys at the school are literally fighting each other to win Bianca's hand, but her father forbids her to date any guy. After Bianca pleads like crazy, her father offers her a deal. Bianca can only start dating, once her sister Kat does the same. Since Kat is a much different person, the chance of her getting a boyfriend are slim to none. 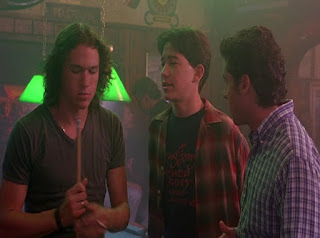 However a guy named Cameron James really wants to date Bianca. He's a nice guy and he doesn't exactly catches Bianca's eye even though she is on friendly terms with him. Another guy named Joey Donner is a selfish rich kid who wants Bianca too. He ends up getting a rather "bad" guy named Patrick Verona to go out with Kat as apparently no other guy in the school would dare date a "freak" like her. The bribe him but Patrick really isn't such a bad guy, and Kat really isn't a bad catch either. What happens if Patrick and Kat fall in love? 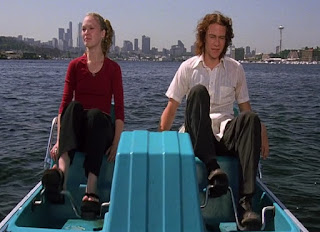 10 Things I Hate About You actually let me down more than it surprised me. Now to be fair, this is a teenage romantic comedy and I got tired of those even when I was their age. It's certainly got better humor than the average film in its genre. I just wasn't terribly thrilled even though at the end of the movie I thought it was a good story. I think it would have been more interesting if Kat had been actually unattractive, as I really didn't really understand why she couldn't get a date even if she didn't look for one.

It's not a bad movie, the acting is ok...better than I thought but I wasn't amazed by the movie. The acting is good but it is a teen movie overall

I actually love this movie, as does my husband. It's a cheesy movie to enjoy if you are just looking to zone out for a bit.

(1) This movie is based on Shakespeare's "The Taming of the Shrew," updated for modern sensibilities!

(2) Here's the Avengers version of that movie trailer!