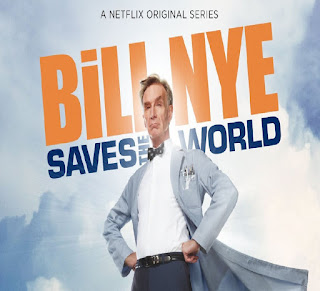 For a millennial like me, one of the coolest things we ever watched in the classroom was Bill Nye The Science Guy. But sometime after the year 2000, most millennials didn't know what happened to Bill Nye as the show ended after a decent run of a few years. Bill Nye Saves the World isn't exactly his first "return" as he tried The Eyes of Nye with a similar concept but it didn't take off especially as it was only on public television or something. Bill Nye in recent years became the ire to right-wingers by advocating science. Right-wingers who believe the world is only 6000 years old and that climate change is a hoax, have undergone a big attack to demonize Bill Nye to the point where they call him a "fake" scientist. Like how anything negative against Donald Trump in the news is "fake news". Bill Nye chose the title for his series as he wants to save the world from stupid people by proving that science is more important than stupid beliefs. 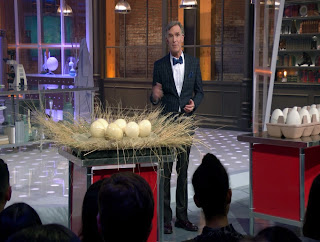 The season is thirteen episodes long with a single topic being the focus for each episode. The first episode is about climate change which to many on both sides of the aisle, does get talked about a lot mainly because deniers make scientists have say things over again. Bill Nye also tackles things like "alternate medicine" like using magnets or pure sound to "heal" a person when in fact they do nothing to the body. He also informs us of the positives of GMOs and why they are not the scary end-of-the-world thing that it appears to be from the words of the people at the farmer's market. Other topics get into stuff like vaccines, human overpopulation, and even the positive effects of video games to advancing actual science. 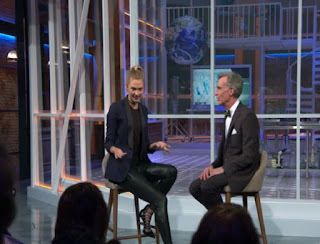 Unlike Bill Nye's previous two shows, he is not even close to being alone here. A live audience is used, and a big team of correspondents do "work" for Nye and report back to him. Such correspondents are the Victoria's Secret model Karlie Kloss, media maker Derek Muller, comedian Nazeem Hussain, and science advocate Emily Calandrelli. Besides them there many guest stars which include celebrities like Zach Braff and Tim Gunn. Every episode there is a guest panel of experts and they discuss the main topic with Bill Nye. 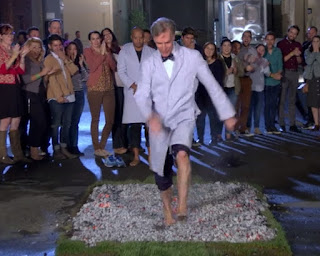 Overall Bill Nye Saves The World is not the perfect show. The new format almost feels like a strange mixture between a late-night talk show and his old show. Besides some rather cheesy jokes, Nye is still the awesome guy we know and love as he teaches things we never knew about science and debunks myths. However his helpers take the spotlight away from him and do more harm than good to the show. The expert panel discussions were more boring to me as they didn't really teach, just discussed the topic. The show reminds me of the guy who just picks around trail mix for M&Ms and one other thing and leaves the rest alone. Not even halfway through, I often fast-forwarded the boring segments to get to the real core of the show. What Bill Nye should have done was made something more to his roots and if he needed a "helper" it should have been his friend Neil deGrasse Tyson.

I adored the old original "Bill Nye the Science Guy" shows. I saw this on Netflix as I was looking around. Haven't watched any yet. I wonder why celebrities are chosen to discuss. Why not real scientists? -Jenn

The real scientists typically get invited over to his panel discussions as experts.

I am not a science gal but I am so glad he is here to dispel the nuts who think the earth is flat, that climate change is a hoax and that we all come from Sfam and Eve

I haven't watched this but I do know who Bill Nye is.

I used "Bill Nye the Science Guy" videos with my third graders, especially as our science equipment was pretty sad. Once I had my kids listening one video of his that had Jimi Hendrix playing "The Star Spangled Banner." One of my teammates stopped by my doorway and remarked, "I'm not even going to ask!" I included it as part of my "American Symbols" unit ~ two for one! LOL