Fact of the Day: Barbara Bush vs The Simpsons 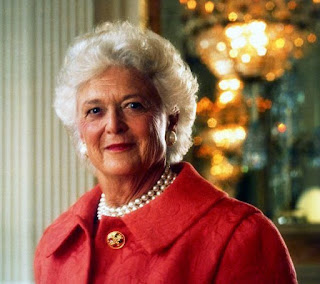 When The Simpsons made their rise to fame in the early 1990's, then-First Lady Barbara Bush commented publicly saying “It was the dumbest thing I had ever seen, but it’s a family thing, and I guess it’s clean.” on the matter. Show-writers responded by sending her a letter "written" by Marge Simpson. Barbara Bush responded back and apologized.
Posted by Adam at 12:00 AM

Email ThisBlogThis!Share to TwitterShare to FacebookShare to Pinterest
Labels: fact of the day, George Bush Sr., republican, the simpsons

That's pretty interesting and kind of Mrs. Bush. Amazing that the Simpsons have been on so many years. I have collected a ton of Simpson memorabilia over the years, too. Hugs...

As RO also said, it is amazing that the Simpsons have been around so many years ...

Sure still going, no matter what anyone said

That is too funny!

Clean? Because that's all that matters, of course. Bush was clean, too, right?

Well it is hardly International news, Margaret - ha ha.
I don't think it stopped or had ANY EFFECT on the viewing of the
TV series - The Simpsons.
Quite frankly I would have to be strapped to a chair to watch the bloody show and then with my eyes taped open.
I think we are all permitted to have views that do not cause an International or National disaster.
Mrs. Barbara Bush was a lovely refined lady.
Colin