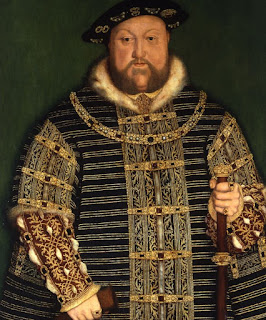 After it became clear that his wife Catherine of Aragon would not produce a male heir, King Henry VIII infamously sought to divorce her. Many years prior, Catherine had married his older brother Arthur but the prince died shortly after marriage. The brothers' father King Henry VII wanted to keep the alliance he had with Spain and agreed to marry Catherine to Henry. Henry VIII pleaded with the Catholic Church as the Bible forbids marrying your brother's wife, and he claimed that while he loved Catherine he no longer wanted to "live in sin". All of this of course was just words as Henry VIII never cared about being that pious, as he was known for many affairs and at least one known illegitimate child.
Posted by Adam at 12:00 AM

Email ThisBlogThis!Share to TwitterShare to FacebookShare to Pinterest
Labels: fact of the day, King Henry VIII

Used the whole religion thing when it suited him and that was that, many still do it these days too.

Wasn't the first case of convenient religious hypocrisy by a politician and certainly was not the last.

Sounds like another current leader in this world ~ so "pious" but it's all for show when you look at how he has (and is) conducted his life.

I actually see a lookalike - well somewhat in Henry VIII and a certain present occupant of 1600 Penn Avenue.
Get what you want by any means.

I wonder what Turnip Top thinks of the utterances (hopefully shown on US TV) of the present visit of Senator McCain in Australia.????
I don't think they will be on talking terms when the Senator completes his tour of the East.
Colin