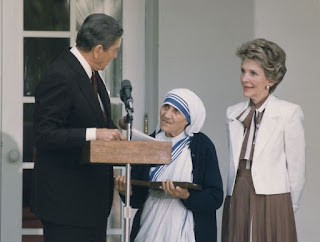 While Mother Teresa was highly respected across the world, she did have a fair share of critics who rightfully called out some of her practices. The biggest flaw was that despite having more than enough funds for adequate medical care, Mother Teresa apparently believed sick people were suppose to suffer like Christ on the cross. She also led an effort to secretly baptize sick/dying people regardless of what religion they were.
Posted by Adam at 12:00 AM

Email ThisBlogThis!Share to TwitterShare to FacebookShare to Pinterest
Labels: Catholic, Christianity, fact of the day

Too much of anything, even religious zeal, is bad.

Everyone is a mixture of good and bad, it's true.

Everyone has beliefs that don't agree with everyone else. As long as you don't try to push your beliefs on others I have no problem with it.

Good and bad all around.

I suppose Adam you do know of the poverty of India???
This woman dedicated herself to the well being of the poor
and the outcasts and India does have a CASTE system.

A little more of Mother Teresa and less of that Turnip Top and the World would be a far better and safer place.
Seems that Turnip Top is now becoming utterly neurotic -
"the most maligned politican in history (of the world!)"
That would be the most inane assumption and declaration ever to emanate from a so-called World Leader.
Politicans all around the World must be laughing their collective heads off...............certainly getting most amusing comments
from reporters here!
God help the Saudis, the Israelis and the Pope........maybe Brussels
will be saved a chaotic visit. I bet the Belgiums are hoping so.
Colin

Well, she was a missionary so of course she would have the, be baptized. No human being is only good or only bad

That was my biggest problem with Mother Teresa. I believe in alleviating suffering whenever you can.