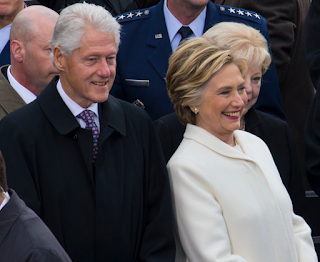 "You know, everybody has setbacks in their life, and everybody falls short of whatever goals they might set for themselves. That's part of living and coming to terms with who you are as a person."

Hillary Clinton actually said this back in 1992 shortly before becoming First Lady of the United States. I'm a Democrat, and while she was not even to close to being the perfect candidate by any means, I have to give her some respect for how she handled the loss of the 2016 Presidential election. She showed a lot of grace and class showing up for Donald Trump's inauguration especially after all the ugliness. I don't think I would have given that orange monster the same respect if I was in her shoes.
Posted by Adam at 12:00 PM

A class act as you say.

Me either. She is a classy lady.

Well she does have class not like the crassness of Turnip Top who seems to be losing and insulting many in the USA and now has the audacity to "lecture" on Arab States on what to do.
The faces of the 50 or so Arab leaders in Riyadh said it all.
This trip is going to be the farce of all farces.
Colin

My daughter was one of the 141 students across the entire U.S. who was nominated for the Presidential Scholars Award, which is the highest federal award to be offered to graduating seniors. She didn't end up winning, but handled the loss with grace as well. Instead of poo poo'ing about the loss, she said, "Well, at least I don't have to go to meet those clowns in the White House this June. I kind of feel bad for the person who won!"

She handled herself very well.

I thought her showing up at the inauguration was pure class! Something Trump will never possess. I was mortified by his behavior at the Nato meeting.