(Not So) Favorite Quotes: Freedom Trump and God 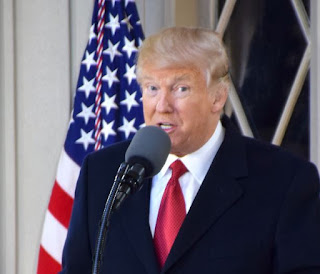 “Freedom is a gift from God not from the government.”

President Cheeto said these remarks at the National Prayer Breakfast and while nobody really believes Trump to be a very religious man he has surrounded himself by the radical Christians who wish to turn our government into something out of the Middle East just with more Jesus and less Muhammad. The sad thing is that most of these radical people believe this to be a true statement. Have you ever read The Bible? Freedom is not a very popular topic. It has countless passages that approves first degree murder because someone committed a cultural taboo. It doesn't give you the freedom of religion or the freedom of speech that's for sure. The Bible is actually pro-slavery (this was used as a justification for the American South from the Civil War on backwards) so you technically don't even the freedom to be um...free. It's only the government that has granted us these rights, and if you elect fools like Trump and and GOP you'll see your rights get smaller and smaller and smaller.
Posted by Adam at 12:21 PM

I have to agree with you and I just don't getwhen I see someone say they have the right to bear arms and they keep their gun on top of their bible! I know that Jesus, from the information presented, really did exist, but I doubt that he would agree with everything that is written in the bible. For example, why would Lot's wife be turned to salt just because she looked back? I also doubt that everyone except for Noah and his family deserved to die in a flood including children and babies. What I think the bible is ...is a good storybook/fairy tale. Unfortunately many love to thump that book while they are ready to enslave people and kill people and claim it is just

It's a silly Trump quote above, but then there are so many to choose from. Freedom is not a gift from God or anyone else. Freedom is something fought for.

I agree, Adam. Many people have sacrificed their lives (and many continue to do so) for our freedom.

And I agree with you too, of course. #45 really turns my stomach.

The "Turnip Top" continues to amuse us Aussies.
Seems he made a bit of a "Faux Pas" with his belated
meeting with our PM Turnbull BUT actually got his name right on
the USN aircraft carrier Intrepid for the anniversary of the Battle
of the Coral Sea.............but I wonder as Turnip Top has admitted
"history is not his forte"!!!
Funny how he kept squawking how he "loves Australia (???) and hopes to visit" - strange that Malcolm didn't invite him!!!
He better start lessons on history and not go inviting himself to other countries. I think it is "Heads of State" who do the inviting.

Seems he is completely "at sea" on the health care systems of other
countries - Medicare here in Australia which is similar to the Canadian system.
Ah well we can but hope that his belated education will improve?????????
Cheers
Colin

For non-history buffs - The Battle of the Coral Sea was
one of the earliest WW2 major sea battles which turned back the thrust of the Japanese Imperial Navy.
And for those geographically ill-informed, the Coral Sea is off the East (Pacific) Coast of Northern Queensland, Australia
- below the Equator and on the western side of the International Date line!
Commemorations were held in Australia off the coastline
from Townsville prior to this Intrepid occasion on the Hudson River.
Survivors from the USN Lexington were here in attendance flown out free by Qantas Airlines (AUST). Marvelous old seamen now in their 90's. The ashes of one US sailor were sprinkled onto the sea after the land ceremony by members of his family.
That was the wish of the US member of the Lexington. Very moving to watch on national TV here.
Colin

Right now, there is a trend of right wing getting to power in many countries: US, a few European countries, Turkey, India and Phillippines come to mind. Sadly, I fear this can only end with outright fascism.

President Cheeto? I am totally stealing that!

I find it hard to believe that Trump believes in God.