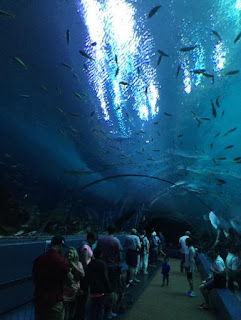 One of the most notable things about the Georgia Aquarium is the giant tunnel. It wasn't quite as intimidating as I'd imagined. When I first saw pictures many moons ago, I'd imagine something out of a Jaws movie with the glass breaking and utter doom coming about. The much older me sure realized that that glass is stronger than most things and paranoia is dumb. 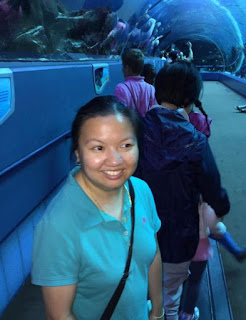 They have a conveyor-belt walkway where don't have to move an inch. I consider it a little dumb because it moves snail-slow. They might as well should of handed me a chair to sit on.
Posted by Adam at 5:00 PM

It is pretty awesome walking through that tunnel.

Must be great to see it in person.
I like to walk along those slow moving conveyor belts, it feels like your speeding along. : )

We have one in Toronto which I still need to visit

Would be a bit stupid to have the conveyer belt moving fast!
The idea is to closely observe the activities of all the fish in the
tank.
Some here have turtles and sharks in them. They are amazing to observe close up......all the time hoping that the glass doesn't break, but that would I can assure you not happen.
Colin

It's amazing to see that in person, isn't it? I missed the dolphin show - I need to go back.

Fun fact: glass gets stronger when it submerged underwater.

I love aquarium tunnels! You feel like you're right in there among the fish or sharks or whatever is swimming by. The only time I've been on a conveyor-belt walkway was at the Tower of London in the building where the keep the Crown Jewels. Its purpose was to keep people moving past the exhibits so they didn't stand and gawk forever, holding everyone up behind them!

A slow ride through the place then, seems a bit odd that you can't get off and for eg. spend longer in one place than another.

This reminds me of the Ripley's Aquarium in Toronto that my husband and I visited a few years ago. Same time of set up!

I think the conveyor belt moving so slow is to give you the feeling of actually being in the slow moving underwater world. They had the same conveyor belt tunnel system at Ripley's and it was my favorite part of the visit.

I've been in those tunnels before. Isn't it the most wonderful thing?

Yes, I've been in similar, they are amazing.
Daisy has a very happy smile, great photo's.

That looks like it would be really something to see. Sometimes those belts move too fast, and then I have to try to move backwards just so I can see what I want.