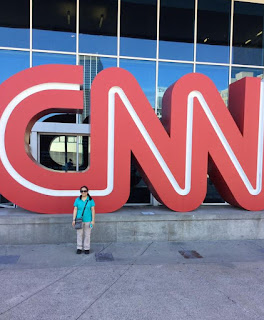 The CNN Center is literally the headquarters for the news station CNN as it was founded in Atlanta by Ted Turner. Normally I wouldn't know if we could go in the place or not, but the tours are a part of Atlanta's Citypass system so we had the tickets to go. 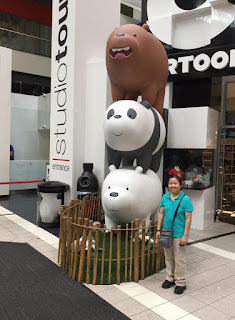 The bottom floor comes at a bit of a shock as the area is actually pretty darn cool and better than most "malls" downtown. There is a large food court and CNN-owned shops. CNN owns Cartoon Network and Daisy liked seeing this statue based on the show We Bare Bears. Ironically there weren't any We Bare Bears shirts in the shop. 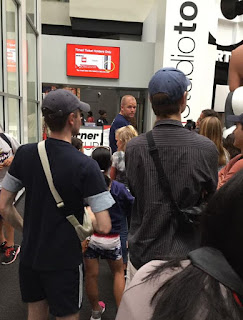 The tours are guided and the security is rather tight to a point. We were given true tickets and waited in the line. Then we were told that are tickets weren't the right time. This was a big WTF and not very cool. We had to wait almost an hour for the next tour to start. 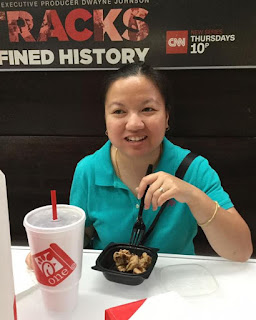 Luckily I was hungry enough and Daisy and I ate at the food court. I had Italian while Daisy had Chick-fil-A. By the time we were done, it was almost time for the tour to start. 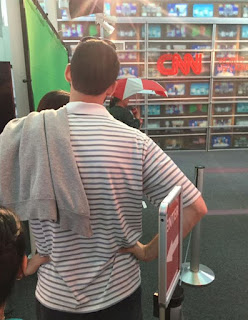 They don't allow pictures long after you get to this point. There is a green screen that lets you look like an CNN anchor which was neat but we didn't want to shell out the dough for the picture. Your tour guide take you on a tour which mostly takes you through mock areas to explain how CNN operates. You get to see a few glimpses of the real operations, but not much. You'll also most likely never meet anyone important or famous, which is a little lame. Though I did like the tour, but I would most likely not do it again.
Posted by Adam at 5:00 PM

Ah dear ole Ted.Quite an interesting character and generous with his money, but he was also: "Turner's penchant for controversial statements earned him the nicknames "The Mouth of the South" and "Captain Outrageous".
Quite a yachtmans of America Cup fame.
I am not real sure whether the New York Yacht Club really liked him.
When it came to yachting he certainly made things tough for his opponents off Rode Island.

Turnip Top certainly has "covered" himself with "Glory" on his first overseas stunt. I can't see too many invitations forthcoming from once close allies for a visit from this "creature of disdain'.
Cheers
Colin

I think it would be cool to tour CNN. I watch it quite a bit ~ whenever I need a break from CNBC. I hope that you and Daisy are having a fun weekend!

This sounds like it was fun. I didn't know CNN was in Atlanta.

Glad you enjoyed the tour ...

Rats! I was hoping you were gonna see Anderson Cooper.

Being a Republican, I would rather tour Fox News...:)