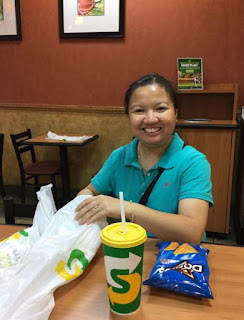 While Daisy looks happy here, I was not. We got caught in the rain and Daisy wanted Subway which we found on 68 Broad St NW. I don't eat meat, and while there are vegetarian subs, I usually don't get them. I got a bag of chips to hold me over until we could grab something for me when the rain stopped. However all the workers were Indian (not Native American by the way) and all of their English skills were very limited. I tried to tell them several times I didn't want a sub, but sure enough they made one...with meat. And since they didn't understand what I was saying, I got stuck with it out of my own pocket. Daisy ate about half of it, but that's beside the point.

I'm all for diversity and everything, but there should of been one person who could understand what I meant on staff. I wrote Subway corporate while we were there and never got a real response back. Dealing with restaurants can be difficult as most are not company-owned but an apology would of been nice at least.
Posted by Adam at 10:00 PM

Oh dear!
At least Daisy has her lovely smile for your photograph!

I don't eat there for the same reason (not catering to the vegetarian diet). However, I would NOT have paid for a sandwich I did not order. I am sure the franchise owner hardly speaks English as well, so good luck ever getting that apology.

Oh, boy! Sounds like a tough day. Not fun.