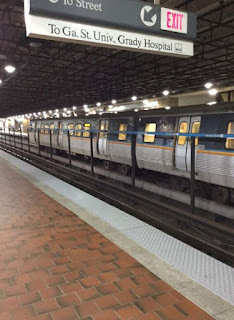 Like other big cities, Atlanta does have a subway. We came across a station nearby and tried to take it to the World of Coca-Cola which granted wasn't far away. While the subway trains are on time, it's certainly rather rough. Besides a few police officers here and there, this place would be a lot scarier. It can apparently get you all over Atlanta city (some of the more non-urban parts of Atlanta not so much) but we used it far less than you'd imagine. If it had been more than just me and Daisy we'd probably be more comfortable. You're safer as a group and more minds make it easier to find your way to your next destination.
Posted by Adam at 3:50 PM

Wow, that's a bummer. The two of us took the Chicago subway system all over the place a couple years back, at all times of day and night, and while the people CAN get a bit weird and sometimes like to yell for no reason (even just at the wall), we never felt like we were in any kind of danger.

At least you gave it a try.

I've traveled on New York's subway a few times but that's it.

Subway trains/buses here are mostly quite safe.
The trains have security guards on them and with
CCT cameras I don't think there should be too much concern.
Pick your carriage........avoid the boisterous cars of the
young, sometimes intoxicated brigade!
Also avoid real late night travel after the nightclubs and bars
are closing......daytime should be as safe as in your own home.
Cheers
Colin

That's too bad about the safety issues. Some subways can be quite intimidating.

I guess the el in Chicago was a lot safer. My husband and daughter took the train to work daily.

Well you gave it a try, but safety issues must always be top of the list!