Photos: Getting To Atlanta 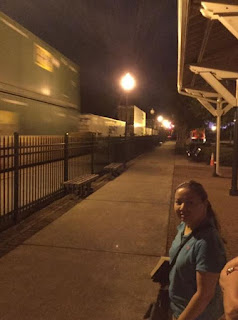 Due to a fire caused by homeless people or something, a bridge to the interstate to Atlanta was ruined. Because of this we decided to take the Amtrak and I hear very bad things about Atlanta traffic anyway. We luckily had a station in our hometown of Spartanburg, though it's unmanned and we were the only ones at the stop. They were about fifteen minutes late but sure enough they picked us up. 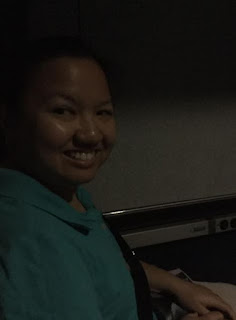 I also wanted to ride the train at least once in my life to say I did it. Daisy wanted a window seat and they gave us the seat way up front where the window is technically blocked. 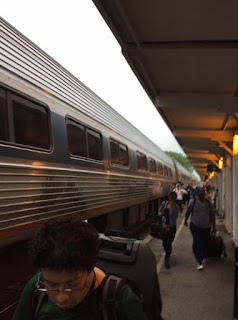 But after about four hours of riding, we were finally in Atlanta. The station in Atlanta is giant in comparison to the Spartanburg location. Not a huge surprise there. 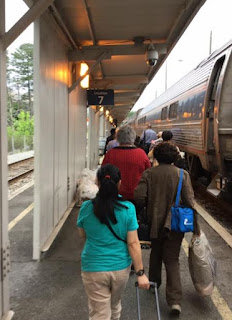 But soon we were off to the next chapter of our vacation. 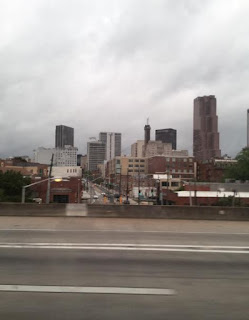 We also used an Uber which is like a taxi service but done through smartphones. We did this about four times through our trip in Atlanta. Everyone was nice, though we also used Lyft which I didn't like nearly as much as Uber. The screen "froze" on me so it was like a shot in the dark on when your driver was coming. We walked and used our hotel's shuttle service for most of the other things. The shuttle sadly only has a 3 mile radius. But we were in the heart of downtown Atlanta.
Posted by Adam at 5:00 PM

I hate driving in Atlanta traffic, so you definitely did the smart thing by riding the train!

I've never been to Atlanta but I've heard good things.

I don't care for traffic.

Uber taxis here (Australia) have virtually taken over. It is not good for the privately owned taxi drivers. Presently there is an inquiry into the system........should be an interesting outcome.
I look forward to more of your reports on Atlanta.
Colin

I love traveling by train. It's very relaxing and comfy.

What a great start to the trip! Good idea to Uber.

Love traveling by train. Enjoy yourselves.

That's pretty much the case here, especially for millennials. Taxi companies are probably thankful the older generations do not trust something like Uber.

Taxis still exist in Atlanta of course, they camped out at the train station and a few of them walked in asking people if they needed one.

I have heard the traffic there is a nightmare. Great idea to Amtrak in and Uber the rest of the time. Unlike HB up there, I think Uber is an awesome service and much more economical than taking a privately owned taxi. We use the service frequently and I have a few friends who drive for them on occasion. It's a great side hustle for an extra bit of cash.

Yay! And so the adventure begins.