Photos: The World Flavors of Coca-Cola 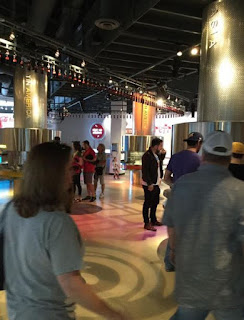 I heard about this before I ever came to Atlanta. At the World of Coca-Cola the last station lets you taste soda flavors from around the world. You take a little plastic cup and you go to dispensers just like you'd see in a restaurant. 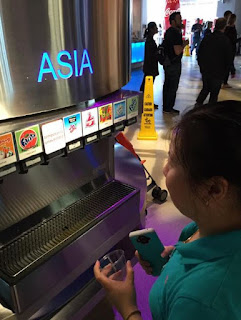 Most were pretty bad I thought. Africa had some of the better ones. In the Europe section exists one called Beverley that was produced for Italy but is now discontinued except for this place. Its flavor is apparently derived from grapefruit but it's so bitter that it ends up tasting like a rubber band. EVERYONE hates it. Daisy likes most drinks and foods, she hated this one too. I can't imagine how anyone could like it unless they don't have taste buds.
Posted by Adam at 5:00 PM

This was my grandkids favorite part! They almost made themselves sick tasting all those flavors.

It's nice to try new flavours even if they're not all good.

Glad you two were able to enjoy this interesting place. Not a Coke person. Prefer Sprite.

In France we had cherry and vanilla Coca-Cola. they even had one with natural sugars ( the label was green!)! But here in portugal we only have regular. And zero.

I bet none of them were better tasting than Coca-Cola!

Now that would be fun ~ tasting drinks from around the world!