Question: Should Michelle Obama Not Run For Office? 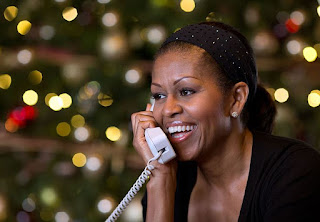 The former First Lady of the United States just recently expressed her desire to not run for public office. Right-wingers sure did demonize her even though the role of First Lady really doesn't have many effects on policy officially. After decades of character-assassination for Hillary Clinton, it's probably a wise move for Michelle Obama to stay a private citizen. Though to be perfectly honest, anyone would be better than the clown in the White House and his stooges in Congress currently.

Should Michelle Obama Stay Out of Politics?
Posted by Adam at 12:00 PM

Yes. As much as I adore her and as much as I admire how intelligent and classy she is, it's better for her to stay out of politics. For her sanity!

After everything her husband went through while in public office, it's really no wonder she wants no part of it.

I think it's her choice!

I think if she genuinely wanted to be in politics, she would have run for something or another before now. I never got the sense from her that she was a political animal like Hillary Clinton.

I would think she would be better not to!
Like Debra, I never got the sense that she was a political animal like Hilary Clinton!

After the way she and her husband were treated while he was in office, I wouldn't blame her for not running. She would do a wonderful job though. I wholeheartedly agree with your last sentence about the clown in the White House!

I'm sure she's experienced as much of political life as she an stand.

I think she would be good but the States was not ready for a white female president despite her issues....they certainly will not be able to deal with a black female president...damm shame!

She would be excellent BUT for her sanity I am sure we won't see Michelle running for the Presidency for many reasons.
I think she will stick to excellent charity work.
Colin

I hope she does NOT run! The family has had enough grief to last a lifetime, I would think.