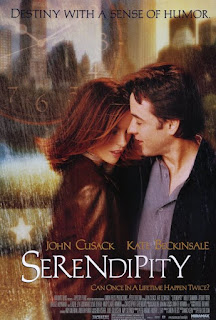 Serendipity is a movie I never knew existed back in 2001. But to be honest, when I was 13 the whole romantic comedy genre was not something I usually watched or cared for. Even as a 28 year old now, it's still not really one of my favorite genres. I heard mixed things about Serendipity as a lot of critics (including Roger Ebert) didn't really like the movie, though it's done better with regular people who go to the movies. The only reason I gave it any consideration was the lead role with Kate Beckinsale. I saw her first in Underworld, and have loved her ever since. She's English and I've seen at least one movie I can recall where she has an American accent. She luckily got to keep her British accent for her character in this movie set in America. 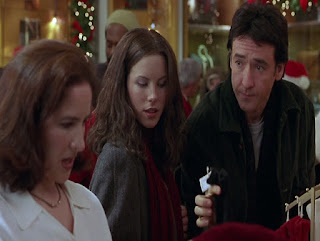 The story begins at Bloomingdale's in New York City at Christmas time where an American man named Jonathan Trager, and a British woman named Sara Thomas try to get the same pair of gloves as a Christmas present to somebody else. It was the last pair, so they argue on who should end up with them. They're polite enough where they insist that the other person should end up with the gloves. While a pair of gloves for Christmas is rather pointless in the long-run, the pair notice how much chemistry the two have with each other. Sara and Jonathan have a platonic night where they get to know each other a little better. Things go well, and in-fact a little too well. 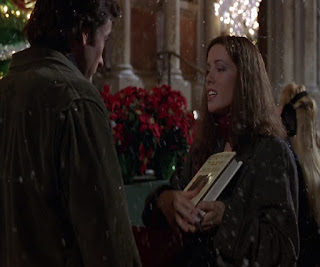 The problem for the two is that both Jonathan and Sara are in committed relationships. Despite that, both can't help but feel like they might be destined for each other. Sara especially believes in fate and tries to see if fate can test the theory. Jonathan writes his name and number on the back of a bill which Sara hopes will eventually make its way back to her hands. Sara writes her name and number in a famous book and insists on having it end up in a used book-store. If the universe wants them to be together, then one of them should be able to find either of the two objects fall back into their possession. But will fate bring the two together? 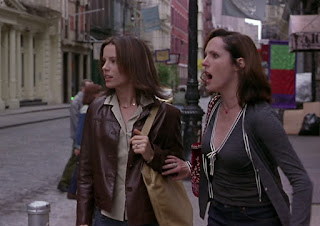 Overall Serendipity falls in about the middle of what I heard from critics and regular folks alike. I wouldn't really call the love-story as good as a personal favorite of mine like The Notebook, but it's a likable film. Kate Beckinsale's and John Cusack's characters seem to have the chemistry that they're suppose to, which is fortunate as the movie would seem rather dumb if they didn't. I would say the biggest flaw of the film is that both characters are so morally flawed that they almost cheat on their fiancees even though they technically don't per se. But it does seem a little wrong, especially as they wait until the last minute to worry about "fate".

Call me silly but this is one of my favorite movies!

I've seen this movie. It's not that good, I think. It's not bad either, it's just ok.
TheNotSoGirlyGirl // Instagram // Facebook

Haven't seen it. I'm not big on romantic comedy, though. You always write such excellent reviews, Adam!

I'd watch it for John Cusack. I like him!