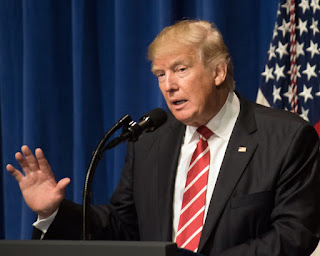 I once had a dream where I suddenly was in the room at some kind of White House or political event. I had always wanted to meet someone like Jimmy Carter, Bill Clinton, or Barack Obama. In the dream, I had the chance to shake hands with Donald Trump. Even my dream state persona knew that was something I DID NOT want to do. I would most likely be cordial to George H.W. Bush and even ol' George W. Bush if I ever had the chance, but you'll never see me being polite to that man. The dream got me so mad that it woke me up a few seconds later.
Posted by Adam at 12:00 PM

Clearly, it was a NIGHTMARE, Adam, not a mere dream, lol!

well to be honest, everyday is a nightmare with Trump regardless of sleep or not

haha sorry to hear this Adam!

A bloody nightmare, Mate.
And now off on his first and hopefully LAST
overseas trip - Good help the Saudis, the Israelis and
the Pope, plus the citizens of Rome when his cavalcade of
damn cars wends it way from Rome's International Airport
to the Vatican! CHAOS!
Colin

Now that's a nightmare...unless you knocked his hair off, then it is a comedy:)

Too bad you didn't throw a shoe at him in your dream. Then it would have been hysterical.

That wasn't a dream ~ It was a nightmare!