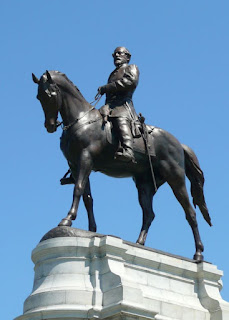 While the South has produced many sons (and daughters) that cling on to racism, false history, and right-wing ideology, I was never among them. New Orleans got in the news recently after the city tore down all the statues that were homages to Confederate soldiers. I was appalled by how many people who commented on news stories that were very upset by the news, and claimed it was "erasing history". For one, if you have to learn history from a statue, you might be an idiot. And number two, statues are meant to honor something or someone. While Robert E. Lee had admirable traits in his personal life, he still was a traitor to his country, and the rest of his men fought so rich men could keep slaves. Imagine if we had statues to the Nazis or Soviets? They're part of American history too.
Posted by Adam at 12:00 PM

Email ThisBlogThis!Share to TwitterShare to FacebookShare to Pinterest
Labels: Louisiana, things I hate

I do not support publicly honouring these types of people. All these statues can be placed in a museum where we can learn about the history behind them.

You are so right. I respect Robert E Lee from what I had read but do not respect what he fought for. I respect Erwin Rommel, who was an officer for the German forces in WW2 mainly in Africa and became known as the Desert Fox. He did fight for the Hitler regime even though he was not a Nazi and actually was part of the much larger group trying to assassinate Hitler in 1944 but he still did fight for a regime that was horribly wrong

Thank God for you Birgit.
You know your history.
There is a well worn catch cry in history.
"My country right or wrong".
Lee and Rommel did abide by this principle even though they both right down realised that is was wrong.

Those Confederate Statues are historical and you can NOT rewrite history.
At the top of the hill just outside Herrlingen where Rommel lived and where he was just 200 metres up the hill was forced to take that poison to spare his family the horrors of a concentration camp there is a statue of the Generalfeldmarshall................should that be ripped down??? I think NOT..........nor should statues of the Confederate Commander in Chief, Robert E Lee.
Colin

I'm with the Blue Grumpster, Adam! That's a great quote! And so very true!