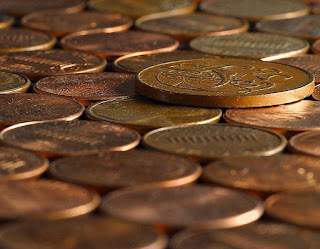 I suppose Pennies From Heaven is not a mere Christian belief (I'm sure many Christians don't believe in it), but certainly a possible-belief of anyone who believes in angels, especially guardian angels. It would be one thing if this was just a common phrase that had no literal meaning, but many people actually believe angels drop pennies (and dimes) to give them "signs" that they are watching over them. Sure it doesn't "hurt anyone" but it does make it cringe people are that dumb and gullible to believe such non-sense.

Ever seen somebody drop a penny? Many don't even bother to pick it up, making it extremely likely you'll encounter a few if you look hard enough. And to be honest, if angels weren't so darn stingy they could solve a lot of economic troubles if they shelled out some Benjamins in the sky. Go to a foreign country that attracts almost no American tourists, go to a rural area, pray hard to your angels, and tell me how many American pennies you find while looking around.
Posted by Adam at 12:00 PM

Email ThisBlogThis!Share to TwitterShare to FacebookShare to Pinterest
Labels: Christianity, things I hate

Research has shown that most people these days won't bother to bend over and pick up coins on the ground unless there's more than 37 cents worth.

I have found 20s and a couple of Hundreds from Heaven, Adam :)

No pennies anymore in Canada. And like Red said, there is talk about getting rid of the nickel, too.

A couple of days ago, my husband and I found a ten dollar bill when we were out walking. That was pretty cool. Paid for our coffee outing later that evening.