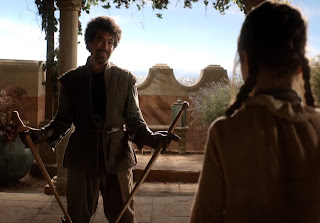 Syrio Forel is Arya Stark's "dancing master" in the first season of Game of Thrones. Syrio Forel was apparently the best sword in Braavos at one time. He is hired by Eddard Stark to give his tom-boyish daughter Arya Stark classes in swordsmanship. 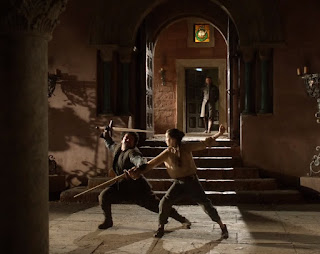 Like her late aunt Lyanna, Arya always wanted a sword to fight with. Unlike Lyanna, Arya's father lets her do so. I think it's rather sweet that Ned Stark cared enough to do so. 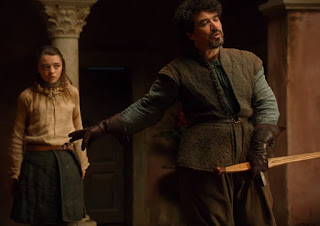 I also thought it was touching how Syrio Forel defended Arya against Meryn Trant and other Lannister soldiers. Which is a little ironic considering that Arya technically wasn't in real danger. Like Sansa, Arya would had been used as a hostage especially with the capture of  Jaime Lannister by House Stark. Though in the books, House Lannister uses a fake Arya Stark to be a bride to Ramsay Bolton, so it was probably for the best. 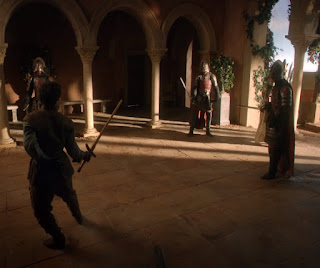 Fans had a theory that Syrio Forel did not die but rather was Jaqen H'ghar. This fan theory had some weight, but after the last season I kind of doubt it's true. Though I don't ever get why Syrio Forel did not take a real steel sword from the Lannister soldiers. He had more than enough chance to do so.
Posted by Adam at 12:00 PM

I liked Syrio too and, and I thought his death scene was really done well for such a small role, you know?
PS Lene Headey (Cersei) is coming for FanExpo Toronto this year! Imma gonna try to schedule a photo op with her.

I liked this character, too. Some of my favourites have been bumped off!

I liked Syrio too ~ and I'm fascinated with Arya, What a compelling character!