Fact of the Day: The 12th Amendment 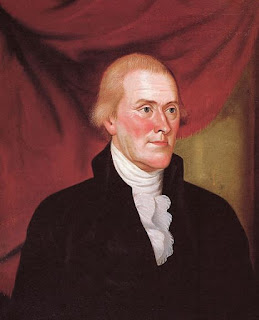 Thomas Jefferson and Aaron Burr had an awkward moment after the 1800 President election. While they ran as running mates, the choices were technically unclear of who should be president or vice president. Electors created a crisis where Aaron Burr could had possibly be chosen as president instead of Jefferson. Soon after the 12th amendment was passed to ensure that the ballot made it clear there was difference of which candidate was running for what office.
Posted by Adam at 12:00 AM

A lot of our history could be different if that issue was still there. I wonder how many vice presidents over the years could have actually been president?

Think they would have thought of that from the get go

Another fact of which I was completely unaware! Thanks, Adam.

Yep, it was a confusing time for all.

If he'd become president, he might not have shot Hamilton. Then again, what kind of president would Burr have been? Then again, he'd still have been better than what we have now.

Oh the American electoral system! Look where it has led us!