Fact of the Day: Granny Lee 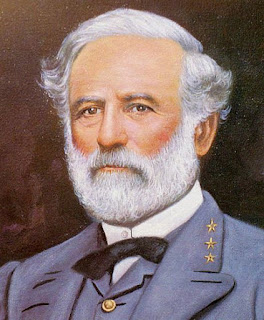 At the end of the American Civil War, Robert E Lee was respected by friend and foe alike but his biggest critics were actually at the start of the war in the South. His men initially called him Granny Lee because of his timid style of command. Confederate newspapers generally had the same fears of a less aggressive style of command.
Posted by Adam at 12:00 AM

Never knew they called him that

I'm reading a novel right now that's set in the Civil War. I don't know if Robert E. Lee will feature in it though -- will have to wait and see.

Never heard about him before. I like this portrait though.

Definitely the opposite of Grant, huh?

He was a refined southern gentleman who Lincoln offered command of the Union Army at one point.

Robert E. Lee has always been a respected man from what I have read, I'm sure his command style even though criticized at first was fine tuned as his command grew.

Strange comments above.
Robert E.Lee military tactics are still used in military colleges.
He was a brilliant Commander-In-Chief.
Read analysises from military historians to find out the REAL
facts. Kindly remember he had always less troops to face the Union Armies.
Colin

I learned something new today :)