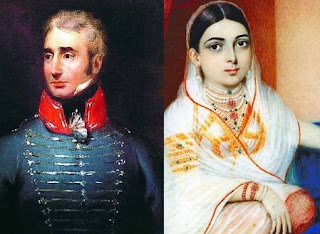 James Achilles Kirkpatrick was a British administrator in the early days of the British-ruled India. While British, James really took kind to the culture of the Indians he interacted with. He adopted many customs and even married a noblewoman named Khair-un-Nissa and converted to Shia Islam. Kirkpatrick was considered to have "betrayed' British interests and got in pretty serious trouble with his superiors. He had two children with his wife who were shortly sent to England to live with their paternal family. The two children were given new "Christian" names, baptized, and were kept by their British family members from interacting with their relatives in India.
Posted by Adam at 12:00 AM

Good that times have changed for the better in this case.

They should totally make a movie out of his life!

A good example of the racist underpinnings of the British Empire.

Wow is right! How sad for his wife. I wonder what she thought on the inside.