Fact of the Day: James Randi 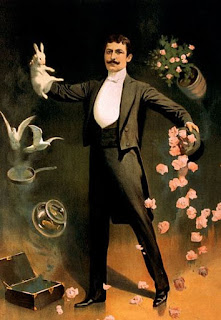 James Randi became a magician in his career but his skeptic nature made him more famous for debunking the paranormal. He started a paranormal challenge which mostly encouraged anyone who claimed to have psychic or supernatural powers to prove it by doing the same tricks they claimed to have the ability but under the supervision of Randi and using only approved materials. Anyone who passed Randi's test would of gotten the large reward, but over the many years not a single person won the challenge. Randi was also responsible for exposing TV Televangelist Peter Popoff as a fraud as his faith healing stunts were only made possible due to information (audience members would write their stories on "faith cards" before the show) being fed via live radio in a ear-piece by his wife.
Posted by Adam at 12:00 AM

interesting, because i love to watch magic shows. :)

How interesting to read this after reading your comment on my blog about the ghost tour :) Where did you go on one? How was it?

Yep, so many a fraud. I knew about the reward for proving it. Funny how none went after that or have won the lottery a 1000 times over.

It's sad that charlatans claim to have paranormal abilities to rob desperate people of their money.

Glad this man showed up that one religious nut. I feel bad for all the people who have given tons of money to these crooks

I love magic shows, Adam. I know that they are all illusions and tricks, but I am always awed and delighted by great "magic." Even more, I love it when tv evangelicals are exposed as frauds! There is little I despise more than fraudulent and/or hypocritical evangelicals.