Fact of the Day: Jefferson Victory 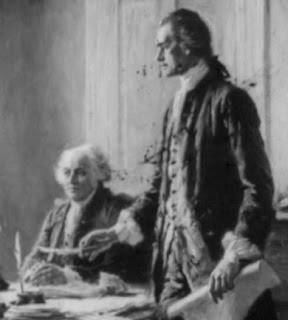 In a fairly close electoral count, Thomas Jefferson defeated John Adams in the U.S. Presidential election of 1800. However Adams supporters figured that Jefferson probably would have lost if slaves were not counted in the population that boosted electoral values. Someone eventually said that Jefferson had rode into the temple of Liberty on the shoulders of slaves.
Posted by Adam at 12:00 AM

Have to love sore losers

And I would have gotten away with it, too, if not for those pesky, meddlesome slaves! - Adams, probably

Jefferson was many things, but a great president he was not.

Interesting fact about them, they both died the same day July 4,1826.

Those electoral votes....I find that just weird but it is politics