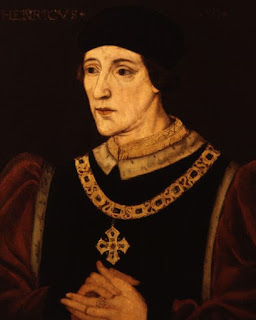 The reign of the English King Henry VI was a troubled one. He became king at a very early age, and when he became old enough to rule, he wasn't very interested in politics. He became very religious and let trusted nobles run his court as he'd rather be a man of God than the man that sits on the throne. He married Margaret of Anjou who was almost his polar opposite, and she proved to be a strong and capable leader. However it would be Henry VI's poor leadership and bouts of insanity that would end up having him lose the throne to his cousin (Edward IV) in the House of York during the War of the Roses.
Posted by Adam at 12:00 AM

Never heard of War of the Roses before.

It had something to do with warring florists.

Not the right guy for the job of king.

Oh boy...well there have been a lot of nuts in royalty

An early age indeed ~ nine months old! I really got an emotional feel of Henry VI when I visited the Tower of London, especially when I stood near the spot where he was murdered. It was probably the thing in the tower that impacted me most. Odd!