Fact of the Day: Manuel Noriega 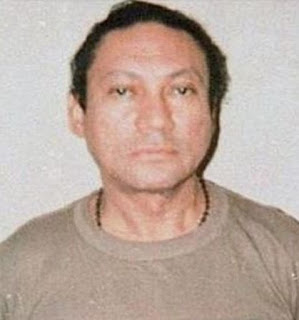 Manuel Noriega was a military commander who eventually became the dictator of Panama during the 1980's due to the help of the American CIA. Outside of his military career, Noriega was a notable criminal (big into narcotics) but the CIA still helped and even employed him. Noriega proved to be too much of a headache for America, so they eventually deposed him and sent him to American prison for the crimes he committed in the past.
Posted by Adam at 12:00 AM

Email ThisBlogThis!Share to TwitterShare to FacebookShare to Pinterest
Labels: fact of the day, panama, politics

Just as bad as the government that encourages that!

Well he turned out to be not such a nice person.

What? America getting involved in the politics of other countries? It can't be. That's only the Russians. Pfffft.

Not a model citizen!

I remember the name.

I remember when all of that went down.

He just died in jail a couple of weeks ago.

Thank God this criminal is DEAD!
Funny when it suits the Americans they use criminal DICTATORS!

Look out you seem to have one in the White House now, the pigeons might just be coming back home to roost.
Colin

Sounds like typical politics, I'm afraid this is the norm.