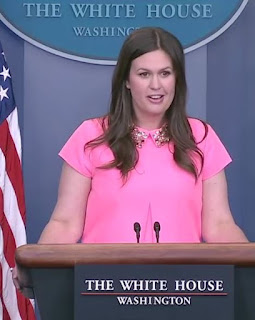 Like many others in the White House before him, Donald Trump has appointed friends or their relatives of his own party (Republican Party) with roles in government. White House Deputy Press Secretary Sarah Huckabee Sanders is not any different as she's the daughter of former Arkansas Governor, former Fox News host, and 2016 Presidential GOP candidate Mike Huckabee.
Posted by Adam at 12:00 AM

All I could think as I watched her today was how can she defend the indefensible!

Oh how small the world truly is :( Thank you for stopping by my blog, and leaving me such a kind comment!

I always enjoy when you give me trivia, which is very cool! Hugs...

It's amusing to listen to these people speak.

I assumed as much from the name, always interesting things that you share with us.

Their buddies are the only ones that agree with them.

I agree that she is annoying. I can't believe how she's defending the president on his latest childish, bullying, stupid tweet. Incredible!

Oh, I wondered if she was related to Mike Huckabee. Clearly, she has drunk the Kool-aid in copious amounts.

I felt bad when people booed after she wished her little girl a happy birthday...

She is a bloody disgrace............with a name like Huckabee maybe she should return to the backwoods of Tennessee and join her kinsfolk.
I think she is worse than the useless male that she has replaced.
Do you have any psychiatrists in the USA who could be sent to that place of confusion and utter disarray on Penn.Avenue????

C'mon - impeach, impeach and then to the looney dustbin to rot!
Colin

I don't think this is TRIVIA by any longshot - the above is FACT!
Colin