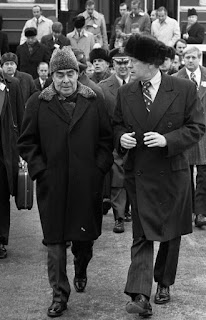 From 1964 until his death in 1982, the Soviet Union was led by Leonid Brezhnev. Personally Brezhnev loved driving foreign cars. While on a state trip to Washington D.C. he really wanted to drive Nixon's Lincoln Continental but the Secret Service wouldn't let him. He apparently tried to convince them though as he said "I will take the flag off the car, put on dark glasses, so they can't see my eyebrows and drive like any American would". Brezhnev was so reckless at driving that Henry Kissinger replied "I have driven with you and I don't think you drive like an American!".
Posted by Adam at 12:00 AM

Must have been a pretty bad driver

AHAHA!
That's a discrimination to drive foreign cars. Also, to straight up be told no because of it.

AHAHA!
That's a discrimination to drive foreign cars. Also, to straight up be told no because of it.

There are some very bad drivers.

Didn't know this, but I'm not surprising considering how crappy Soviet cars were.

The last of the Stalinist clique. A real bastard this one - bugger his bloody driving lack of skills.
Colin

Yes...why am I not surprised

This was a really fun fact ~ a little levity behind the historical figures.