Fact of the Day: Stalin Behavior 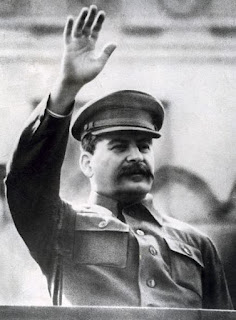 While Joseph Stalin's father was well known to have severely beaten the future Soviet dictator as a child, his mother also used harsh physical punishment as well. Despite his cold nature as a ruler, Stalin (according to his mother) was a very sensitive child. After he got into power, he asked his mother why did she beat him so hard. His mother told him that is was the reason he "turned out so well".
Posted by Adam at 12:00 AM

No parent of the year award for either of them

Another reason to condemn child abuse.

And we have mousillini face in the white house!

Wow what terrible parents, that's for sure!

There is a big difference between discipline and abuse, this was definitely the latter.

These are the type of people that really should not have had kids:(
PS On a lighter note, Poop Café serves their desserts/ice creams in toilet-themed dishes and cups!:D

So this means one should feel sorry for the psychopathic, serial killing, paranoid dictator??

I'd question that he turned out well. He was responsible for killing more people than Hitler, and mostly his own people.

So far as the meaningless pursuit of power at any cost is concerned, he turned out very well.

True Stephen .........and a fact not known to many.
Brutal and sadistic bastard.
Colin