Fact of the Day: William Mulholland 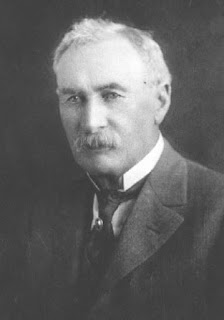 While Los Angeles is one of the largest and most notable cities in the world, the city owes a lot to a man named William Mulholland who was responsible for building a aqueduct that gave the city a supply of water in its early history. Sadly for Mulholland, his career came to an end when a dam he had personally inspected quickly collapsed in one of the worst man-made disasters of its time.
Posted by Adam at 12:00 AM

Email ThisBlogThis!Share to TwitterShare to FacebookShare to Pinterest
Labels: California, fact of the day

Oh gosh, that wasn't too good then.

Oh ouch! What a sad thing!

How unfortunate for him.

I recognize his name from that movie "Mulholland Drive" that was set in LA. I think Nick Nolte starred in it.

That is one fact they don't talk about.

A well-known name in Los Angeles.

Can't win them all. Terrible indeed.

I didn't know that! Perhaps I forgot. Rather ironic and sad, since I did study dams in Orange County as part of a hydrology course at Cal State Fullerton. Now I know the story behind Mulholland Drive.