Fact of the Day: Your Ancestor The King 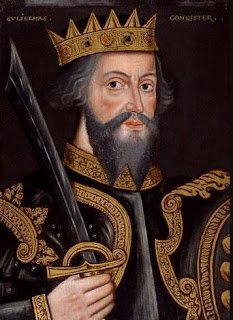 William the Conqueror is unarguably the most important king in early English history as he changed the culture and language of the country forever. Not only that but all the future kings and queens of England (and eventually all of Europe) all descend from William as he had many children who also had many children of their own. However through legitimate and certainly illegitimate lines, William the Conqueror is theoretically the ancestor of most people with Western European ancestry (especially English and French) which also includes every U.S. President ever. If you can claim William the Conqueror as an ancestor, you're also related to his own distant ancestor Charlemagne.
Posted by Adam at 12:00 AM

That's quite the ancestry line.

I had a cousin say that we descended from Charlemagne, although I haven't traced our lines there yet, it makes sense though if you could trace it back far enough that we are all related.

I think the Dutch royal family is related to him too!

So does that mean I have to split my inheritance with everyone? Damn.

Oh yes, Uncle Billy, I call him. And back off, Pat Hatt, that money's MINE!

I bet good old Willie the Conqueror would be spinning in his grave
if Turnip Top was a relative???????????
My God.......Turnip Top is alienating the rest of the World with
his latest outburst of utter stupidity.........climate change.
Colin

I have a little French in me from way back, but not as far back as William the Conqueror. Charlemagne was my mother's favorite historical figure.