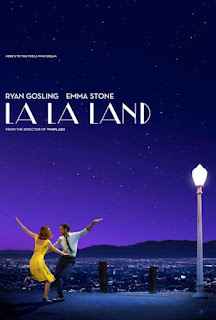 At the Oscars this year, La La Land was the talk of the talk. Emma Stone won Best Actress which apparently was the reason they had a mishap of wrong envelopes as La La Land was incorrectly named Best Picture. That being said, I was interested especially as I like Emma Stone especially for her role as Gwen Stacey in the 2nd wave of Spider-Man films. I haven't seen much with Ryan Gosling (except The Notebook), but I know he's considered a heartthrob for many women. I heard their chemistry in this movie was really good, and people just love it when two really attractive celebrities have that love story whether it's fictional or not. Though while I'll admit Emma Stone is cute, Ryan Gosling's real-life partner Eva Mendes certainly has her outclassed in terms of looks. But anyways, did I like La La Land? 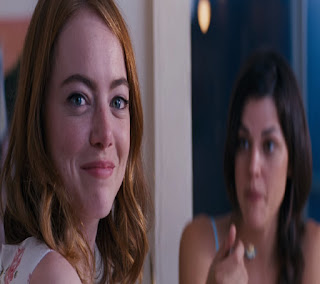 The story is about Mia Dolan who lives in Los Angeles as many who aspire to be the next big celebrity do. When she's not going to auditions, she works at a cafe as a barista. She doesn't quite like her job, and hopes she can land a new break. But like many who have followed the same path, the auditions can be frustrating as there are countless others there many of whom seem better or more attractive looking than her. But her life will soon change better or for worse when she meets a man named Sebastian Wilder. 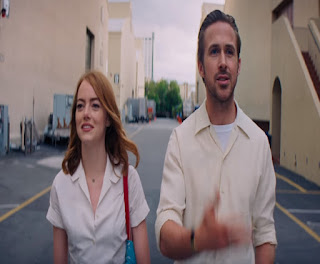 Sebastian Wilder is a jazz musician, and he admits to Mia that he fully knows that jazz is rather...uncool by the standards of the 21st century. Like Mia with acting, Sebastian struggles to find stable employment in the field he wants to be in. One such case is being fired at a Christmas event for taking things too "original". Sebastian is optimistic that Jazz can be "saved" and proves to be the more optimistic one of the pair. While many get their big breaks, countless others fall into the realm of depression and obscurity. Will either Sebastian or Mia achieve their dreams after years of hard work and determination. 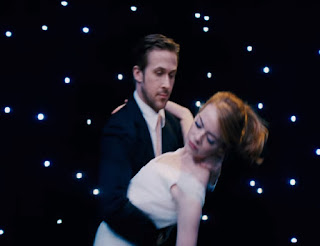 To perfectly honest, I really did not like La La Land. I was really over-hyped and the story is flat. It's cool many times on a visual level, but there were many points where I just wondered "What am I watching?". I remember once reading Roger Ebert saying that he would of given a movie utter praise based on the visuals alone, which I think is a rather dumb thing because movies and TV shows are about story-telling. The story itself isn't really that wacky but the artsy way of showing the story doesn't really make you care about the plot. It's also technically a musical but there are a majority of moments where nobody sings at all, which is strange for the genre it's suppose to be in. The Oscar favorite failed to win Best Picture and I really can see why.

My daughter and I liked this movie!

I haven't seen the movie myself but the general consensus among people I know who have say the same as you, that it was more over hyped than really good.

I thought it was overrated too. The plot would be considered tragically romantic only by people who have still not learned that you can't have it all in life. To the rest of us, the plot was "well, DUH!" They were both lucky they got as much as they did.

Hmm still want to see it. I love these actors!

It would be hard for me to express just how profoundly I hated this movie. The first number was the best, but after that this movie limped along without a plot and without competent singing or dancing...and I do enjoy good musicals.

I finally saw it as well and was wary because I saw certain clips already. I love musicals and am always in awe of th greats well known and less known. This film was good at the beginning with everyone dancing round the cars and where we get to meet the main leads. I liked the story with the modern twist but, whereas Emma is ok with dancing and singing...not amazing, mind you, but ok, Ryan was...not good. His piano playing was excellent and you can see how much he studied to get that down but he didn't study enough with the singing or dancing. His singing was weak and I will take Russell Crowe in Les Mis singing over Gosling's singing my day. Asfor their dancing, Emma was good but Gosling needed more work. I cringed every time I saw him stick his arm up only to see his hand flop down, he would only get a 7 out of 10 on Dancing With The Stars...maybe a 6. I would give it a B- because I am a lover of musicals and it had that in there plus a nice take on the romance even though I would have loved it to be the one where they stay together. The problem is that it didn't wow me and it was missing something. I'm glad it was recognized but it didn't deserve all those accolades

I haven't seen it still Adam!

And now Im not sure to see lol!

This! I seriously hated this movie. I have no idea why the hype was so huge. I nodded off several times, and like Stephen, I do enjoy a good musical every now and again.

I haven't seen it!

Isn't it funny how some people like the movie and some really, really don't? I haven't seen it.