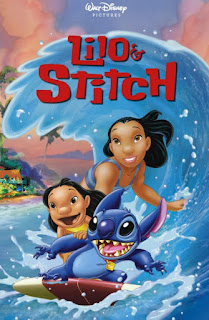 All the way back in the year 2002 I never saw Lilo & Stitch either in theaters or at home and I'm not quite sure why I skipped over it. I knew the little blue guy was some kind of alien monster, and the two girls were from Hawaii. But that was about it from I could pick up from what I heard about the film. I've been meaning to catch up on Disney classics I've missed over the years. Granted it's been fifteen years since the movie was brand new, so has it aged well? Is it as good as The Lion King? Or is Lilo & Stitch as bad as some of the direct-to-video garbage Disney churns out? 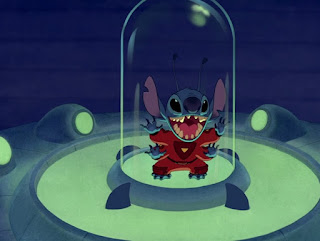 The story begins with the revealed existence of Experiment 626. He was created by the rather dark scientist Dr. Jumba Jookiba. They're both put on trial by the alien Galactic Federation and the leaders give Experiment 626 a chance to prove he has some morality. However Dr. Jumba Jookiba created him to be a monster of pure destruction, so the elite aliens don't approve of him. They arrest Dr. Jumba Jookiba and send Experiment 626 into exile. While he was suppose to send his days on a remote rock in space, he manages to free himself enough to catch a ship. However the ship crash lands on Earth. 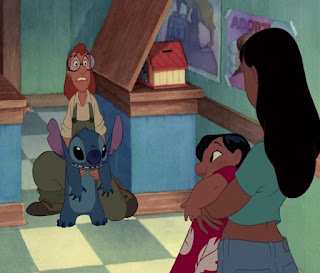 The alien leaders task Dr. Jumba Jookiba to capture Experiment 626 to earn back his own freedom. However the little monster proves himself to be intelligent enough. He knows that nobody can harm him if he's close enough to humans. A misfit girl named Lilo Pelekai feels left out and needs a friend. Her sister (and guardian) Nani Pelekai decides that a dog would be a good idea to give Lilo some friendship. Experiment 626 morphs a little to be more dog-like and the strange Lilo likes the odd "dog" and names him Stitch. But will Stitch learn how to become part of a family or is he really just a monster? 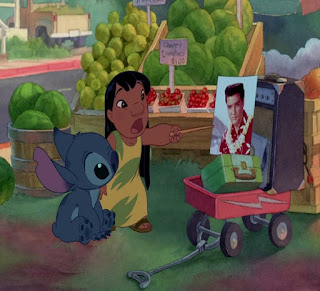 Overall I liked Lilo & Stitch quite a bit and in the end was about what I had expected. I didn't quite realize how much dark humor was in the film which I do enjoy. I also sympathize a lot with the outcasted Lilo and the two work well together. While I doubt it'd be anytime soon, but one of the reason I wanted to catch up on Disney classics is because of all the new live-action remakes. A big question will be how well would Lilo & Stitch work as that kind of remake. That being said, I do realize there are sequels (direct-to-video) but I hear they're pretty bad so I'll probably never ever seen them.

I've never seen it, but it sounds entertaining.
Have a great one, Adam.

It's such a cute movie!!! One of my favorites.

I haven't seen this movie, Adam, but thanks to your excellent review, I'm going to watch for it. I love the premise behind it.