Nikki Haley is Mad Because People Booed Her at Pride Rally 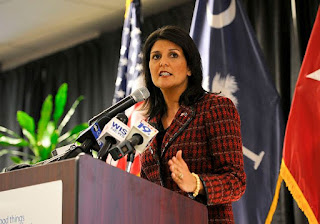 Former SC Governor (now U.S. Ambassador) Nikki Haley got upset after people had booed her while she was with her son in New York after a pride rally passed by the restaurant she was at. She claimed this country is "better than this" and that "hate never wins". To be fair Nikki Haley was not even close to being the worst politician on LGBT issues, but she still defended laws that discriminated against the LGBT community in South Carolina and hid under the rock of "religious liberty" when all else failed. When you did the opposite of protection, what else kind of response did you expect? You can't support bigotry while you're in office and expect immunity from criticism when you leave.
Posted by Adam at 11:30 AM

I think she's playing a cagey game, with eyes on the Oval Office herself.

Your last line sums up the situation perfectly.

What country has this person inflicted upon them as the US representative?
Colin

Ah - I thought I'd seen her on TV here.
Ambassador to the United Nations..........well the UN is these
days pretty useless so I guess she is where there are many idiots and she is in her ideal location.
Colin

Well said, Adam! Hate and bigotry have largely driven me away from the church.