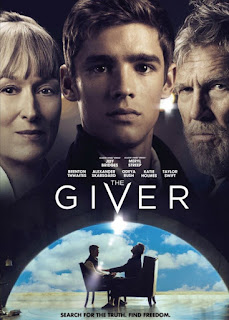 Even though the memory isn't quite sharp, I do remember The Giver back in 2014 but I never saw it. Certainly not a movie I'd go see in theaters on a whim. You easily notice the film's two biggest stars one of whom is Meryl Streep whom I don't like nearly as much as other people do. I am a big fan of Jeff Bridges though, and I was surprised to learn that not only is this based on a novel from 1993 but Jeff Bridges tried to get this movie made shortly after the book's release with his father Lloyd Bridges in the titular role of The Giver. The novel wasn't stand-alone either, as it was part of a fairly healthy sized series. Seeing how it's been a few years, and as far as I know there is no plans for a sequel, I kind of worried on if this film did well at all. 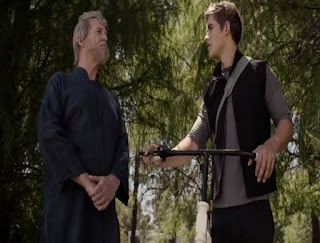 The story is mainly about a young man named Jonas whom has no last name just like everyone else in the "caged" community that has no idea of what lies outside its borders. Everyone at a certain age is given roles, and Jonas is shocked to learn he is suppose to be the next "receiver".  All memories of the past are kept by a receiver, and the only one that exists is a bitter old man who ranks really high up in the community. The Giver isn't nearly as powerful as The Chief Elder who watches over the community often in hologram form. In the community, all people are given "medication" which secretly dilutes all their emotions and they even don't see color. 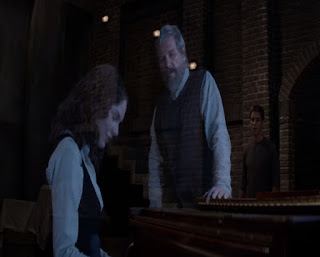 Jonas realizes the truth about the community and soon learns how to jump past the barriers to learn how to feel. The Giver tells Jonas the story about the last receiver-in-training, and how awful that turned out. Being sheltered for most of his life, Jonas is not really ready to handle the memories of mankind's past because he has to take in the good and the bad. When Jonas realizes the differences between good and evil, he vows to stop the elders from keeping the community standing the way it is. But with the odds out of his favor, will Jonas have a chance to save not only his friends Fiona and Asher but the whole society as well? 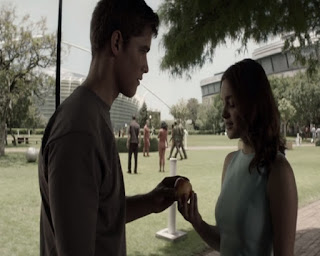 Overall I didn't like The Giver quite as much as I had hoped but kind of what I had expected. Jeff Bridges is pretty strong here, and so are Brenton Thwaites, Meryl Streep, and Odeya Rush but the story could use some work. I didn't read the novel and I did hear someone claiming things got "lost in translation" and that's usually something that happens in the transition from paper to Hollywood. I also tend to dislike dystopian themes (few exceptions) and nothing in the story really stands out here in the genre and it all feels a little cliche. It still think it's a decent movie, but it certainly could have use more metaphorical polish even if the talent was all there.

I never even heard of this one!

I haven't seen it but appreciate your review.

A gay man who doesnt like streep ? How dare you! Lol

I've seen this movie. And I've read the book!