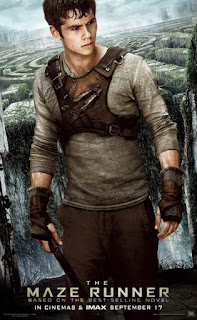 I don't know why but I always assumed The Maze Runner was based on a book from perhaps the 1990's but the novel (by author James Dashner) came out in 2009 which wasn't even ten years ago. So to have a movie in 2014 is pretty fast for the novel to film translation. I hadn't really noticed but I couldn't really tell if The Maze Runner was a hit or miss with the box office or critics. The movie was enough of a success to get a sequel the year after, but another one is also coming next year as well. But before I can say I'll watch the sequels, I will have to like the original enough to care about finishing the story. 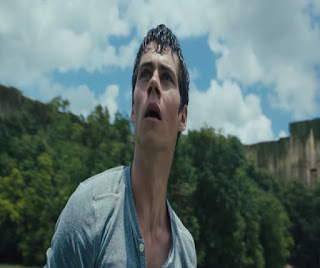 The movie focuses on a young man named Thomas wakes up after being sent up a underground elevator. The elevator ride is one-way and he arrives with almost no memories into The Glade. He is befriended (mostly) by other boys who came to The Glade in the same fashion. The area is enclosed by giant walls and no escape. It's not quite clear why they're there, but the boys at The Glade seem to have outside help (basically provided basic needs) that never tells them why.  Life is rather tough there, as a young man named Gally really makes Thomas' life a living-hell as he starts to bully him for almost no reason. 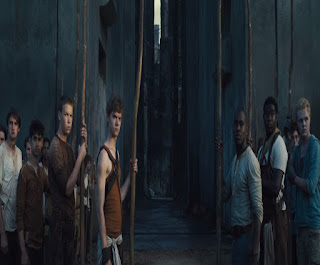 The walls aren't completely secure, there are moving passages that lead to giant mazes. The large maze apparently changes once a day, and a small group of boys become Maze Runners in daily attempts to find a escape route. However they can't stay away for too long. At night, the walls close until the next morning. Large monster-like creatures known as grievers roam the maze, and apparently are so strong and active at night that death is almost certain. With two boys face certain death, Thomas jumps in to save them. But will he even be able to save himself or will he perish in the maze like many others? 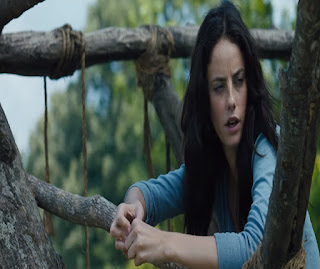 Overall I wasn't overly thrilled with The Maze Runner. I never cared much for any of the characters like Thomas, Teresa, Alby, or Newt. I also really hate mazes as I'm not one for directions, so the idea of a giant maze really irks me deep down in my soul. That being said, I'll probably see the sequels but not anytime soon. I didn't hate the film per se, but I do care enough to see where the story is going to end even if I thought the ending was rather strange and stupid. This movie did okay with critics, but I hear the sequel did worse, so I'm not hoping for much. But hey some movies are better when you set the bar low in your mind.

I loved that movie.

What you said at the end about the characters is dead on. What killed the books for me was that all the characters are totally one-dimensional without even a hint of a personality, so I ended up not caring about them, which meant I ended up not caring about finishing the book series. I thought the movie might be better, but I couldn't even sit through the whole thing. :/

I've seen the movie and read the book. I'd give both about the same rating as you've given the movie.

I wasn't thrilled with the book series. I agree with your film rating as well.

i actually like the movie. and the second one was good too. it was better than I expected.

I'd give it a "C." It was rather predictable and wee weren'y interested enough to watch the second one.

Again, I haven't seen this movie. The premise behind the film sounds awesome, but it sounds like neither the book nor the movie delivered on an intriguing idea. Too bad.