Things I Hate: Give the Rainbow Back to God (Phrase) 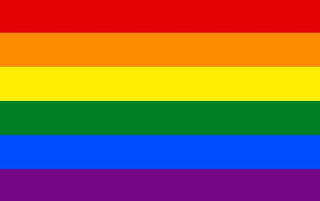 Like how far-right extremists (Tea Party) took the Gadsden Flag as their own, the LGBT community has pretty much owned the rainbow. I think it's hilarious and yet still rather frustrating ridiculous that there are a few people on the religious-right who demand that the LGBT community give the rainbow symbol "back to God".

In Abrahamic mythology, the rainbow appears as a promise from God to never drown the Earth ever again. Rainbows are merely a separation of  white light we can see, if it was a promise from deity I don't think I could see it from a garden hose or a crystal. Rainbows were in other religions as well, so should the LGBT community give it back to the Chinese goddess Nuwa who not only was suppose to have created the world but used rainbows as well?
Posted by Adam at 12:00 PM

I dont care what reason people fly a rainbow flag or what it really means or who it belongs too, but I do know that Gods promises are NO MYTH.
Lisa

I like seeing rainbows no matter who's supplying them.

I think that, unlike the religious right, God is sufficiently easy-going and gracious enough to share the rainbow. One meaning does not negate the other.

You'd think they could just share them. I'm sure they could both use the rainbows for different reasons and it would be fine.

I don't think they have to "give it back" - how would that even happen? Everyone can use that symbol.

The only think I know is that rainbows are beautiful and we should all just enjoy them.

And what about SKITTLES? Do they have to give the rainbow back too?

Seriously??? I had not heard this before! I'm so sick of the hate and intolerance of the far right religious extremists! They are nothing about Jesus or a God of love and mercy. I used to have so much fun with prisms with my third grade students. We'd turn out the lights, split light coming in through the skylight in our classroom, and send rainbows all over the walls and ceilings.