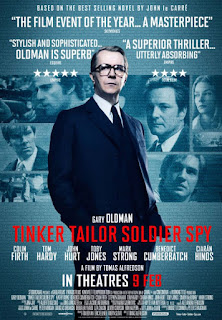 For the last six years, I had never even heard of Tinker Tailor Soldier Spy. It didn't really look like my cup of tea at first (mainly because I wasn't even sure what it was), but the first thing I noticed was the amazingly strong cast it had. You got Gary Oldman, Benedict Cumberbatch, John Hurt, Colin Firth, Tom Hardy, and many other good ones. The film is based on a book series by British author John le Carre who originally wrote the books at the height of the Cold War. Now many years after the Cold War, the books are more "history" than a "what if" on the future between the West and the Communist countries. It's a little odd but they didn't even try starting with the first book in the series as I believe this one is number two in the long line of them. 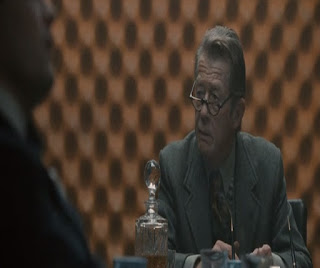 The story is set in Great Britain with the top level of its spy program. Two senior officials named "Control" and George Smiley have been constantly trying to battle against the Soviet Union in terms of espionage. One of their agents Jim Prideaux travels to Communist Hungary on a mission but things go terrible wrong, and both Control and Smiley are forced to resign because of it. The British government put some of their old subordinates in charge in their place, however something is up. Control and Smiley believe there is still work to be done even if they are retired from the whole "circus" as they called it. They believe they may be the only ones who can stop Great Britain from losing the Cold War. 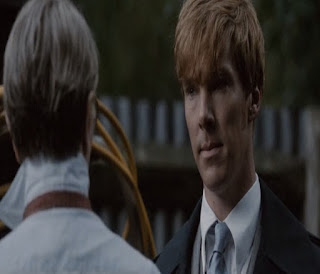 There are rumors of a double agent somewhere near the top of the spy program. George Smiley recruits an agent named Peter Guillam to figure out who is the spy among them. The ones in control are in a hurry to win over the American CIA who no longer trust the British in terms of keeping secrets...secret. They have a special Soviet Spy they believe is giving them wonderful secrets from the Soviet Union however it's hard to tell if what they're getting is metaphorical gold or if they're being played for fools. Because in the spy business, neither the British Prime Minister nor the Dictator of the Soviet Union truly knows where anyone's loyalties really are. 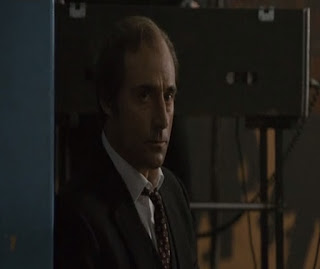 Overall Tinker Tailor Soldier Spy is a good film, and about what I expected. The Cold War has always interested me so it does really well re-creating that time period. Gary Oldman got nominated for an Oscar for his role here, but I wouldn't say this is his best ever. I think the film really should have started with the first book as you don't really care that Control and Smiley are retiring because you don't know these characters at all, if you haven't read the books anyway. There are some badly explained scenes that only make sense once you read about them and re-watch it, and there is some questions that remained unanswered. There is still rumors of a sequel but I remain doubtful it will ever come to light.

Yeah, that cast is amazing!

I have't seen it.

Gosh! With this cast, I don't know why I've never seen this before. Thanks for the heads up. B is not bad:)

I haven't seen this one. It seemed a little dry to me, but perhaps I'm wrong.

I really liked this movie. I saw it twice in the theatres. Gary Oldman gave a brilliant performance, in my opinion, as the extremely buttoned down spy, George Smiley. He expresses a genuine and unguarded emotion only once in the entire film and it is all the more painful and real because it is so outside his usual character.

It is a good movie and I love Gary Oldman but I have to admit, I had a hard time following the film and found it slow in parts